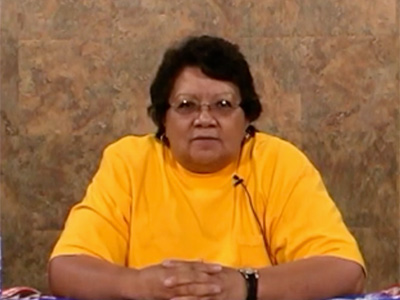 Andrea Woods is a Shoshone from the Wells Band of Te-Moak Western Shoshone. She tells us the history of her grandmother Gimma Jones. Gimma Jones was born in the mid-1800s in Cherry Creek, NV. As a child she survived the smallpox epidemic, and was sold at the age of 12 for food and horses. She describes her grandmother’s story about migrating throughout the traditional Shoshone territories, and trading. She tells how her grandmother used to camp, make traditional clothing, learned how to cook, and how to garden and ranch. She also spoke of the interaction between the Shoshone and the Union Soldier back in the 1850s and 1860s. (GBC VHC Description, 07/31/2017)